The house cleaning has been done! Everything looks nearly as good as the day we moved in! Now it is time to go onto the next chapter of our lives! I'll see you in my next location!

Posted by NessaKnits at 3:51 PM 6 comments

Woolworths to match dollar for dollar donations through their stores ...

All donations over $2 will receive a tax receipt at the checkout.

Floods and Other Things

I cannot post without mentioning the dreadful floods that Queensland and northern New South Wales are having at the moment. I am sure that by now most of my readers are aware of what is happening.

I applaud the efforts of all volunteers and all paid workers who are assisting with the efforts and who are so brave as they save people from floodwaters and also the coroners and the police who will be going house to house in the aftermath and hope that the death count does not extend any further than the current 12 people.

Like many, I feel powerless to help, but I congratulate those such as Recycled Fashion who are donating goods to be auctioned (hers will be a silent auction with the highest bidder to be notified, then to present evidence of their donation to the relief fund). I intend to place a bid on that one! There are also many other blog writers and artists who are contributing items for auctions such as this and you can connect with them by hitting the pink button on the left of this post or perhaps scroll down my blog to the Australian bloggers and see some who are participating.

My husband and my family are in the midst of moving to the Southern Tablelands of New South Wales, about 80% packed now and when I am sorted in our new home, with internet connections etc, I will find something to place for a silent auction on my blog.

We will be out of our home in Sydney within the coming week and as we pack, I can't help feeling the irony of our packing taking so long as some people are having their lifetime of possessions washed away in a matter of hours.

I don't have anybody I know directly affected by the floods, but there are several people whose blogs I read who are in the thick of it and I was speaking to a friend last night whose father has a friend whose parents experienced the 1974 flood and are now experiencing this one through their house at Goodna. Unbelievable the destruction.

I don't know if I should continue on with my post, but in light of the fact that I don't know when my next will be posted, I will ...

Okay, batteries have been found and I have a few photos of my holiday thrifting to share and one other ...

First, the achievement. At the age of 38, about 20 years too late, I have achieved my red P plates, which now means I can drive a car by myself at a restricted maximum speed of 90 kilometres/hour. The driving test was passed on my daughter's 9th birthday. This happened last week, not today. Just delayed in sharing.

I have been driving across several suburbs by myself since and have had the pleasure of visiting Freedom and Fantastic Furniture in a bulky goods shopping centre by myself! I plan visiting a Spotlight by car next and maybe a Vinnies. 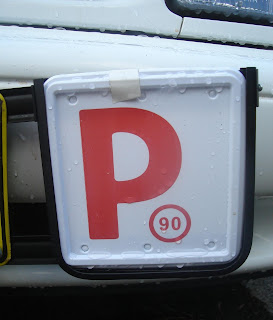 Onto holiday thrifting finds and photos!

Arnotts Tin, Harrington Markets - $3. Now faithfully containing the DMC stranded cottons (no, not the ones organised ...others!) 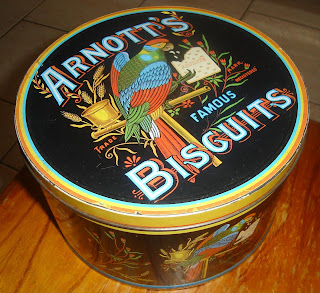 1940's/1950's Vintage Anodised Cake Tin, Harrington Markets - $10. The seller had another similiar, but bigger for $18 and had this one marked at $12 and instantly said $10 when I offered him $20. Now kicking self I didn't purchase the other one. Now faithfully holding DMC Perle cottons. 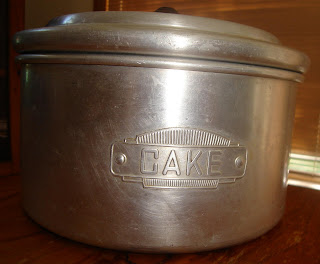 Interesting pottery/china mug, Harrington Anglican Op Shop, $1. No marks of maker on the bottom. This was too good to share with the boys in my previous post regarding "Special Drinking Mugs". 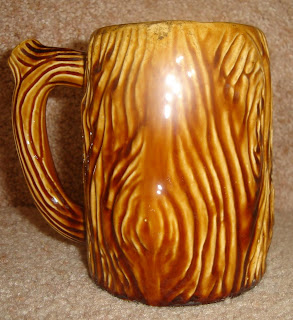 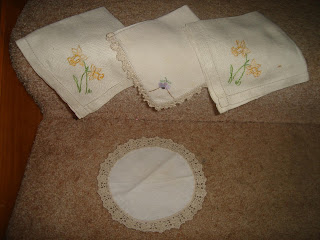 If you do, have you tried to get a copy lately and been unable to?

I had tried just before Christmas and was told by several newsagents that it was no longer on their list (they looked it up for me). A bit more searching for the website and I find out it has been discontinued.

Remaining magazines in their stable are Inside Out and Country Style. Wonder how long these will last?

Do you buy magazines and if so, what ones?

and at my sister's she had Australian Country Style (so I had to buy the first copy of that I saw... very nice!)

I don't buy Who or New Idea or Women's Day, or Australian Women's Weekly, but if I come across a copy, I will read it!

Email ThisBlogThis!Share to TwitterShare to FacebookShare to Pinterest
Labels: Magazines

If you are a crafter and if you are anything like me, you already have a stash of things already made! I'm only doing this on my Facebook at the moment, but if that is successful, then I might bring it to my blog ....

And I was photographing my op shop / market finds until my batteries ran out ...

Posted by NessaKnits at 8:43 AM 4 comments

I'm back from spending Christmas with my sister and her family near Maitland and then camping from Boxing Day near Taree on the Mid North Coast of New South Wales with friends and have been catching up with washing since our arrival home mid afternoon yesterday.

There were washing machines at the caravan park we stayed at, which I used every second day, but it still all catches up with you with sheets and beach towels and dirty clothing packed back in containers instead of being placed in the washing bag after use. We use tough plastic containers to pack our clothes in for camping instead of zippered bags. They stack in the camping trailer better!

I have been op shopping - buying knitting needles, and table clothes and cute embroidered napkins and very special drinking mugs for my husband, my friend's husband and my friend's father and my brother-in-law and all under $1. Is it bad that I found one I was going to give my brother-in-law and then decided it was so special, I had to keep it for myself. Photos later!

My friend and I have decided that purchasing special drinking mugs from op shops while on camping holidays could become a new challenge. I got her dad and her husband some very special matching steins ... The lovely ladies at the op shop must have thought I was crazy .. but I kept them in business ...

Don't you love a new op shop to browse through? Especially one with air-conditioning on a 30+ degrees celsius day when you husband has taken your kids out fishing ...

I also sewed myself a peg bag from a 50c tea towel from the op shop, and started stitching my friend a travelling tablecloth to use on her camping table to mark all the camping trips her family have taken embroidered on one of the plain tablecloths I purchased.

I was also able to very much enjoy the 50% off post Christmas sales that Spotlight at Taree and elsewhere  had on quilting fabric, buying a few fabrics at $2.50 a metre, marked down from an original $22 a metre to $5 and then with the 50% off discount. Whoo hoo!

To wrap up... a holiday with family and friends and with time to op shop, buy fabric at Spotlight, do some stitching and attend two local markets at Harrington and Black Head and enjoy a few meals out at the pub and the local Bowling Club overlooking the water .... PERFECT.

Hope all my readers had a lovely holiday also and got to do some of the things they loved like me!

Posted by NessaKnits at 9:14 PM 7 comments